With its roughly 63,000 inhabitants the island of Ischia is one of the most beautiful islands in the Gulf of Naples. Also called the “green island” for the ever lush vegetation that covers it is connected to the mainland by a series of maritime transport. The earliest name given to this island is definitely Pithecusa (by definition the island of potters ), in fact , it seems that thanks to the skill of the inhabitants in shaping the clay and the wealth of raw materials in the territory , the island d ‘ Ischia has been for many years the center of the trade routes of the Mediterranean, where, apparently, was a Greek colony . Ischia is a very popular tourist destination , a perfect combination of sun , because of its mild climate , sea, because of the multitude of beaches and mountains. Not to mention then that the volcanic origin of the island led to the generation of thermal waters with healing properties.

Here are some typical elements : 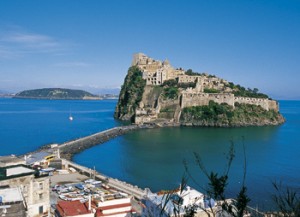 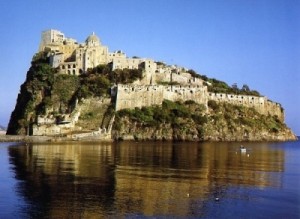 The Aragonese castle: no doubt one of the most beautiful and characteristic of the island of Ischia , stands on a bubble of magma that has been consolidating over time on which it was built this fort whose main purpose was surely to first defense against the attacks of the invaders. Located on the eastern side of the island, in the past, the only access to this fortification was by sea , today , is reached via a stone bridge that connects it with Ischia Ponte. Through a taforo dug into the rock below you can access the inside of the castle. The internal path is illuminated thanks to high skylights from which once was thrown boiling oil on invaders. On top of the castle was later built a hotel / restaurant called ” The Monastery ” from which you can enjoy a breathtaking view.

The Source Nitrodi: particularly famous for the many healing properties of its waters, this source , located Buonopane , part of the municipality of Barano D’Ischia , annually hosts a multitude of tourists that exploit the properties of this water rich in potassium , chlorine, carbon , calcium, sodium and sulfur. The source is easily accessible by car , with the possibility of stopping in large car park, which by public transportation (buses) . Today, the source has been completely modernized with the creation of a real plant ” Nitrodi source of the Nymphs ” , equipped with showers , fountains, sun , etc. . , Which allow various treatments.

The Maronti beach: without doubt one of the most beautiful and fascinating island of Ischia , it is also the longest . Sheltered by a series of hills and enriched by special inlets and caves , make the bay of the Marontis unique . Among these caves , c ‘ it is a ” source of dark hollow ” , which is the most impressive source of thermal waters of Ischia. The presence of several restaurants along the beach then , allows visitors the chance to taste really delicious seafood specialties . 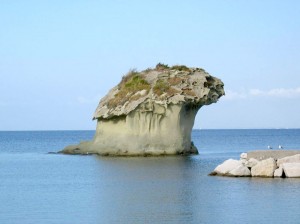 The Mushroom: in the town of Lacco Ameno there you can admire the symbol , a boulder rolled from Epomeo, probably during an ‘ eruption and that the sea has shaped up to make it look like a mushroom. It is located in front of the beach in the center of Lacco Ameno. This particular rock is only one of many, of particular forms of which are studded beaches of the island. 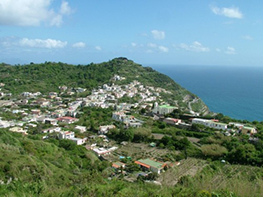 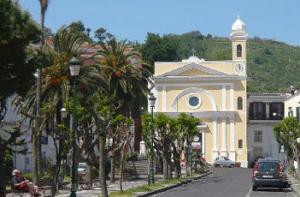 Cheat is one of the municipalities on the island of Ischia , whose districts are Fiaiano , Testaccio , Buonopane , Cretaio , Lido Maronti , and Piedimonte . In particular, we recall the areas of Cretaio particularly suitable for carefree nature walks ; Lido Maronti in which we find the beautiful beach and Buonopane , the latter known for the presence of the source of Nitrodi and the dance of ‘ Ndrezzata in addition to special of the past presence of many bakers .